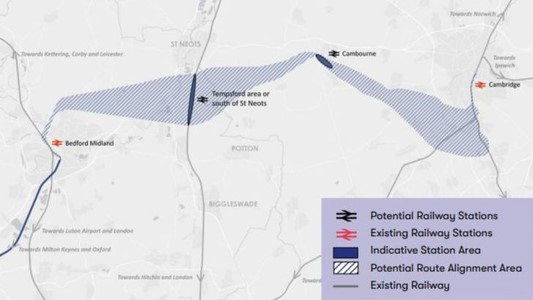 On January 30th, 2020 the East West Rail Company (EWRC) announced its preferred route for the link between Bedford and Cambridge.

After carrying out a consultation in early 2019, public support was given for Option E which will come through Cambourne and either Tempsford or south of St Neots. If supported by the Government, it is intended that two new stations will be built at these locations as part of the link.

This new piece of key infrastructure places Bedford at the centre of the East-West rail link, connecting Cambridge to Oxford. At present major upgrades have been undertaken between Oxford and Bicester on which trains are already operating. Construction has begun between Bicester and Bedford which should be completed by 2023.

The rail link has the potential to support the Oxford Cambridgeshire Arc, supporting economic opportunities and housing delivery whilst reducing congestion and increasing connectivity between the two knowledge centres.

It is hoped that the final phase of the East-West Rail Link will be completed by 2030. The Government will have the final say in taking the project forward.